Issue includes a free code that can be redeemed for a digital version of the issue.
This issue is a variant of Empyre (Marvel, 2020 series) #1. There exist further variants: 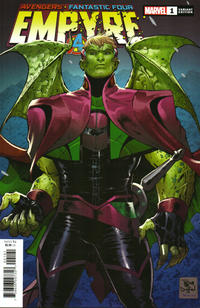 Empyre [Part One] (Table of Contents: 2)

Genre
superhero
Characters
Fantastic Four [Thing; Invisible Woman; Mr. Fantastic; Human Torch]; Avengers [Captain America; Iron Man; Thor [Odinson]; Hulk [Jennifer Walters]; Ghost Rider [Robbie Reyes]; Black Panther; Captain Marvel [Carol Danvers]]; Hulkling [Emperor Dorrek VII; Teddy Altman]; Super-Skrull [Kl'rt]; Quoi; Swordsman; Tanalth the Pursuer; Captain Glory; Mur-G'nn; Brainstorm [Valeria Richards]; Powerhouse [Franklin Richards]; Jo-Venn; N'kalla
Synopsis
Having allied themselves with the Cotati against the oncoming menace of the Kree / Skull fleet, the Avengers are stunned to find that the Fantastic Four are supporting the invaders, and that former Young Avenger Hulkling is now the Emperor of the united Skrull and Kree peoples. The new Emperor doesn't want a fight, but he has to handle rival factions around him. The Avengers realize that they have been tricked by Quoi, the Celestial Messiah, and have helped him unleash a deadly Cotati weapon against the other side.
Keywords
Blue Area; Cotati; Kree; Skrulls