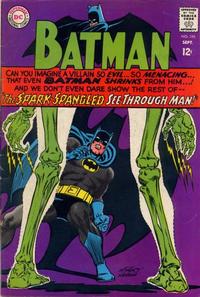 Credits for script and inks confirmed from Julius Schwartz's editorial records, provided by DC Comics. Records show that Bob Kane was paid for the pencils, but scholars agree that pencils were actually by Moldoff. Script credit also found in Batman #199.

Job Number
6551
First Line of Dialogue or Text
That's a cool paint job!
Genre
children
Synopsis
Using vaseline on threads of a paint jar to prevent paint from drying up and causing the lid to stick.

Thanks to Lance Smith, Billerica, Mass.