[See-Sawing Before It Starts Pouring] (Table of Contents) 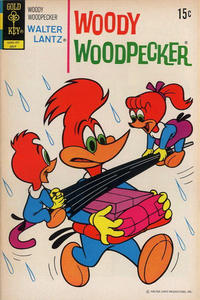 Trapped on the high window ledge of a castle, Woody makes reference to the fact that he can fly (an aspect of his character that irregularly comes up in the comics), but decides to not resort to said ability as a means of escape. “It’s so long since I’ve done any flying… (Gulp!)… I don’t seem to have the urge to try my wings again from here!” Christensen's original title "Cookoo Cookoo [sic] Clocks", from his notes.

A Man of His Word (Table of Contents: 8)

First Line of Dialogue or Text
Strike three! You're out!
Feature Logo

New story. This story is a virtual scene-by-scene remake of the 1959 Augie Doggie cartoon "Talk It Up Pup", written by Michael Maltese - up to and including the "Itty-Bitty League" being named as such, in both cartoon and comic.

One illustration of Charlie Chicken tickling his foot with a feather, resulting in the "first line" of laughing sounds indexed above.