Ex-SKIS Me, Please! (Table of Contents) 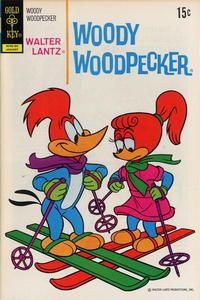 The Phantom Trail (Table of Contents: 2)

Get These Dynamite Embroidered Cloth Patches That Tell It Like It Is! (Table of Contents: 3) (Expand) /

Peck Up and Leave! (Table of Contents: 7)

First Line of Dialogue or Text
Knothead! You're going in the wrong direction! The schoolhouse is that-a-way!
Feature Logo

This story is a remake of the Michael Maltese-written Augie Doggie cartoon “Growing, Growing, Gone” (1961), with Knothead in the “Augie Doggie” role, and Woody in the “Doggie Daddy” role, complete with Woody in supposedly-scary costumes, Woody being bashed by Knothead’s bindle as well as routed by his slingshot, and a pivotal role for a little girl woodpecker (or doggie) – but with a different kicker at the end. It is also a rare Woody Woodpecker story where Knothead appears without Splinter.

The Freeze Breeze (Table of Contents: 10)

In Marksmanship Competition, a Boy Learns to Act Like a Man. (Table of Contents: 13) (Expand) /