Back cover designed by John Roshell; 3-D rendering by Doug Rowell and Randee Z.
This issue has variants: 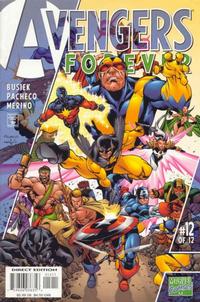 Genre
superhero
Characters
The Avengers [Captain America; Yellowjacket; Songbird; Hawkeye; Captain Marvel; Wasp; Giant Man]; Rick Jones; Libra; Immortus; the Time-Keepers; Kang; the Supreme Intelligence; an army of evil, divergent Avengers; an army of good, divergent Avengers; an older Rick Jones; Jack of Hearts (cameo)
Synopsis
As the war wages around them, Kang fights off the Time-Keepers who are trying to accelerate him into his Immortus incarnation, thereby ensuring their timeline. Rick sacrifices himself to destroy the Time-Keepers’ chrono-cannon. Captain America destroys the Forever Crystal, fearing its power to be too great. The armies of both divergent Avengers also disappear when the crystal is destroyed. Immortus is reborn, and Rick is saved when the Supreme Intelligence bonds him and Captain Marvel again. Finally, all the heroes are returned to their proper place and times. The Supreme Intelligence is also returned to captivity, in possession the reformed Forever Crystal, unbeknownst to everyone else.
Reprints

Issues 10-12 are annotated in this issue.