Order of sequences from atlastales.com. 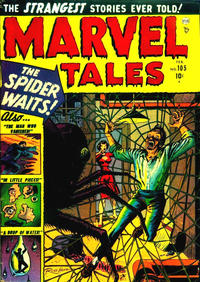 The Spider Waits! (Table of Contents: 1)

Job Number
9438
Genre
horror-suspense
Synopsis
Sven is a factory worker who is charged with the task of keeping his workplace free of spiders. Unfortunately, Sven suffered a harrowing incident as a child and is deathly afraid of them. As an adult however, he manages to overcome his fear and takes great delight in killing every spider he can find. After work, he meets a woman at a bar who pays him ten dollars to clean the spiders out of her parlor. When he arrives at her house, he realizes that the lady is actually a spider-woman who traps Sven inside of a gigantic web.
Reprints

Page length and penciller from Atlastales.com.

In Little Pieces (Table of Contents: 2)

Job Number
9393
Synopsis
A man finds he has the power to kill people by tearing photos of them. He decides to get rid of his shrew wife by tearing her photo but after doing it without even glancing at it, his recently fearful wife tells him that she has been trying to please him lately so she replaced her photo with one of him.
Reprints

The Curse Of Makhe-Sof (Table of Contents: 3)

Sequence added from information at atlastales.com.

The Red Face (Table of Contents: 4)

Job Number
9477
Genre
horror-suspense
Synopsis
A man arranges for a rival to be murdered at Mardi Gras, but instead of meeting the assassin in a Devil costume, he gets hauled away by the real Devil.
Reprints

Wessler credit per biblio in Robin Snyder's The Comics Vol. 18, No. 7, July 2007. Pencils and inks credits from atlastales.com

The Drop of Water (Table of Contents: 5)

Job Number
9444
Characters
Midgard Serpent [Jormungand]
Synopsis
The tear from a statue turns out to be the universal solvent.
Reprints

The Man Who Vanished! (Table of Contents: 6)

Job Number
9133
Synopsis
An evil old man in a cabin tends plants who used to be people.
Reprints