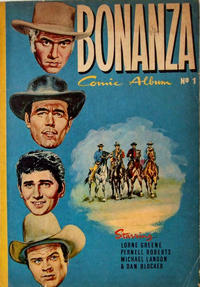 The Caballero (Table of Contents: 5)

Genre
western-frontier
Characters
Ben; Little Joe; Lucy Mather; John Mather; Rudolfo Chavez [Tiburico Vasquez]
Synopsis
Escorting a neighbor girl, Ben Cartwright barely saves them from a forest fire. Escaping with them is Rudolfo Chavez, who joins a posse hunting down bank robber Tiburico Vasquez and kills two of the bandits. He later holds Lucy Mather and Little Joe for ransom. The Cartwrights run him down and wound him, upon which he confesses that he is Tiburico Vasquez.
Reprints
Keywords
Bank robber; cowboy; gunfight; Hispanic; kidnap; Mexican-American

Lost in the Snow (Table of Contents: 6)

Genre
western-frontier
Characters
Ben Cartwright; Hoss Cartwright; Adam Cartwright; Myra Belle Reese [Belle Reed]; Jim Reed; sheriff
Synopsis
Mrs. Reese stumbles into the Ponderosa in a snowstorm, saying that her husband lies injured in the blizzard. As the Cartwrights help her search she fires off a gun in hopes that her husband will hear, triggering a landslide that blocks the train. She returns to the Ponderosa while the Cartwrights continue searching, eventually learning that all of this has been a dodge to cover the escape of train robbers. They are unsuccessful in capturing the gang, but Hoss recovers the stolen loot.
Reprints
Keywords
Blizzard; railroad; train

The Lost Riches of Tayopa (Table of Contents: 7)

Genre
non-fiction
Synopsis
From 1632 to 1646, gold and silver mined at Tayopa in the Sierra Madre were stored on site, rather than being exported. During a great Indian uprising the location of the cache was lost. Hopeful explorers still search for the lost wealth of Tayopa.
Reprints
Keywords
American Indian; Apache; Chihuahua; educational; fact; gold; Native American; Sierra Madre; silver; treasure

The Sportsman (Table of Contents: 8)

Job Number
Bonanza #7-642
Genre
western-frontier
Characters
Little Joe; Strong Bull; Sir Wilfred Bledsoe; Bart
Synopsis
The lieutenant governor of Massachusetts asks the Cartwrights to host an Englishman on a hunting trip. When the Shoshone see that Sir Wilfred is wantonly killing buffalo, they want to attack. Little Joe tries to mediate, but winds up having to defeat Sir Wilfred in a boxing match. The Shoshone capture both, and send Little Joe to negotiate for the hunting party to leave their territory, but the hunters hogtie Little Joe. Making his escape he frees Sir Wilfred and convinces him to leave the territory, satisfying the Shoshone.
Reprints
Keywords
American Indian; boxing; buffalo; cowboy; Native American; Shoshone

The Snow Walkers (Table of Contents: 9)

You Ride the Chisolm Trail (Table of Contents: 10)

About the ins and outs of working a cattle drive. Header illustration.

The Windwagon (Table of Contents: 12)

Genre
western-frontier
Characters
Ben Cartwright; Hoss Cartwright; Jack Swilling; Winnemucca; Rawson
Synopsis
Three miners have been killed, and the community is riled up against nearby Paiutes. Hoss and Jack Swilling capture a band of Apaches, proving that they, not the Paiutes, are responsible. Jack, the Cartwrights, and the sheriff cut off angry miners riding against the Paiutes, preventing a frontier war.
Reprints
Keywords
American Indian; Apache; bear; cowboy; Native American