First Line of Dialogue or Text
Who does your nails?
Genre
teen
Characters
Betty Cooper; Veronica Lodge; Svenson the janitor
Synopsis
Svenson thinks Betty is talking to him. 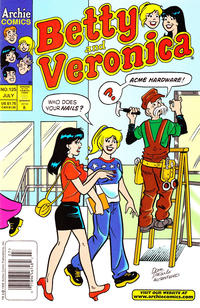 Genre
teen
Characters
Sabrina Spellman; Harvey Kinkle
Synopsis
Sabrina is so overcome by a tearjerker movie that she solves her problem with magic.

A Tale of Riverdale (Table of Contents: 3)

Suit Yourself (Table of Contents: 4)

Genre
teen
Characters
Betty Cooper; Veronica Lodge; Ms. Pushups; Archie Andrews; Dilton Doiley
Synopsis
A fire emergency at the school forces everyone to evacuate the building, including Betty, who is wearing Veronica's new designer bikini and nothing else.
Reprints

The credit correction was for the story "That's Of Snow Account", which was credited to Dan Parent, but actually written by Kathleen Webb.

Characters
Betty Cooper; Veronica Lodge; Smithers the butler; Hiram Lodge; Steven Squeelburger; Kermet Morgan
Synopsis
Hollywood director Steven Squeelburger is stopping by the Lodge mansion with an actor from his latest film, "Jurassic Pork", and neither Betty nor Veronica can contain themselves anticipating which gorgeous actor it is.
Reprints