The Defective Detective! (Table of Contents) 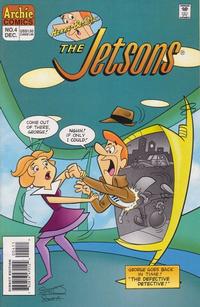 The Defective Detective! (Table of Contents: 1)

Genre
humor; science fiction
Characters
George Jetson [also as Sam Crackcase]; Elroy Jetson; Jane Jetson
Synopsis
George buys a new trans-dimensional television that will allow him to enter into the action onscreen, but the experience is not what he planned when he lands in an old detective show.
Keywords
parody; television

George's client in the detective show wants him to locate the Carbon Cuckoo, a parody of the Maltese Falcon from the novel by Dashiell Hammett (1930) and the 1941 film adaptation.

Sponsored by the United Cerebral Palsy Associations and Archie Comics.

Genre
humor; science fiction
Characters
Judy Jetson; Astro; Nicky Nova
Synopsis
Judy wants to meet soap opera star Nicky Nova but she's amazed when she get a chance to act in a scene with him. However, an over-protective Astro keeps getting in the way.
Keywords
acting; soap opera; television

The Smart Pills (Table of Contents: 7)