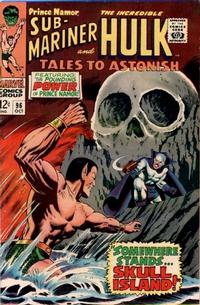 First Line of Dialogue or Text
Let the leaders of Atlantis gather to my throne!
Genre
superhero
Characters
Sub-Mariner [Namor]; Lady Dorma; Grand Vizier Vashti; Princess Fen (flashback, Namor's mother); Plunderer [Edgar Plunder] (villain)
Synopsis
Before conducting war against the surface-dwellers, Namor visits the Savage Land beneath the continent of Antarctica. Dorma, against orders, follows behind him. Meanwhile the Plunderer, unknown to the Atlanteans, has constructed a base on Skull Island and as Namor and Dorma approach, fires on them. Namor is captured while Dorma flees back to Atlantis.
Reprints
Keywords
polar serpents; Savage Land; Skull Island; vibra-cannon

According to Nick Caputo, Roth drew all of page 10 and "may have also done some touch ups on the faces of the Plunderer and his accomplice on page 6, panel 3; page 9, panels 3 and 4; possibly the last panel on page 11 and the first panel on page 12." (R. Schenk, May 2009, via the Error Tracker)

A Sagacious Smattering of Scuttlebutt, Scoops, and Space-Wasting Small-Talk! (Table of Contents: 2) (Expand) /

What Have I Created? (Table of Contents: 3)

First Line of Dialogue or Text
Picture yourself upon the distant planet Wundagore II, ruled by the...
Genre
superhero
Characters
Hulk [Bruce Banner]; High Evolutionary; New Men (villains)
Synopsis
With Banner trapped and about to be evolved by the High Evolutionary, the New Men attack and stop the experiment. Banner becomes the Hulk and fights the New Men. The Evolutionary decides that the only way to stop his former creations is to do to himself what he planned on doing to Banner--evolving himself a thousand years into humanity's future. He does so and becomes a transcendent being who devolves his New Men back into animals before melting into cosmic consciousness. The Hulk is left alone on Wundagore II, the only sentient being on a lonely planet.
Reprints
Keywords
Wundagore II (planet)

See notes for next issue which picks up a new adventure on Earth with no explanation as to how Hulk got there.

First Line of Dialogue or Text
Dear Stan, I just bought the latest batch of Marvels, and, as usual, I couldn't...
Characters
Hulk [Bruce Banner]
Reprints

Letters from Charles Meyerson, Scott Campbell, and Alan Siegel. Includes an image from an earlier issue in advertisement for The Merry Marvel Marching Society membership kit.