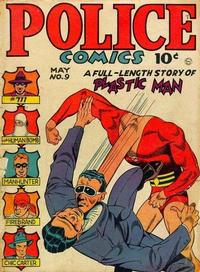 Satan's Son Sells Out to the Japs! (Table of Contents: 1)

Wildwood Cemetery was the home of the Spirit. There is a real world cemetery by that name in Massachusetts, a state to which Cole later moved.

First Line of Dialogue or Text
On the frozen steppes of Russia, Eagle Evans and his pal Snap Smith, battle for the lives of two men representing the allied cause of democracy...
Genre
detective-mystery

[The Horse Killers] (Table of Contents: 4)

Genre
adventure; crime
Characters
#711 [Daniel Dyce]; Bat Barron (villain); the Nazis (villains)
Synopsis
Dyce finds a way to contribute to the national defense from prison when Nazis threaten to recruit agents from within the prison.

The shoe print disappears from the small circle on Manhunter's chest.

First Line of Dialogue or Text
At the home of his fiancee, Jean... Roy Lincoln receives an urgent message...
Genre
superhero
Characters
The Human Bomb [Roy Lincoln]; Jean Adams (Roy's fiancee); the Nazis (villains)
Synopsis
The Human Bomb tracks down a group of Nazis who had seized an aluminum mine in Argentina.