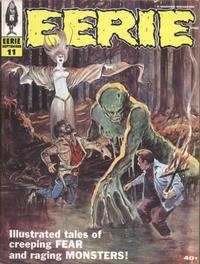 To Slay a Dragon! (Table of Contents: 5)

The Mummy (Table of Contents: 6)

This story is adapted from the screenplay for the 1932 Universal film The Mummy, with art swipes from movie stills.

Per J David Spurlock and his posting to the Grand Comics Database Facebook page on 18 May 2020, Russ Jones and Wally Wood worked in conjunction on this story adaptation together on the script, pencils, and inks (though it is possible Wood did most, if not all, the inking work here). Wood did the lettering alone.

Explaining Wood's method of working, Spurlock stated, "Wood's regular working method was not the Marvel/DC assembly line tradition of one person penciling and another inking. Wood would do 8.5x11 layouts, hand them to an assistant to find a reference from Wood's files; then the assistant would trace/copy the reference to a full-size board to match Wood's layout. Then Wood would turn it into "finished art" (more than inking) changing anything and everything he wanted along the way. If he trusted an assistant enough, he might also have them ink some simpler things like panel borders and backgrounds."

Dan Adkins had been credited as the penciler or the inker for this story in some sources (for example, Richard Arndt' Complete Warren Checklist), but per Spurlock Adkins did not begin working for Wood until 1965, after this story was originally published.

Adapted from the short story by Edgar Allan Poe.

The Blood Fruit! (Table of Contents: 8)

The Monster from One Billion B.C. (Table of Contents: 9)