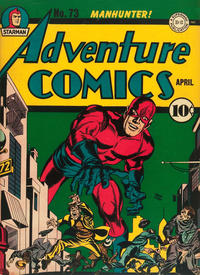 Knight of the Revolution (Table of Contents: 2)

The Case of the Murders in Outer Space! (Table of Contents: 3)

Genre
superhero
Characters
The Starman [Ted Knight]; Woodley Allen; Doris Lee; Clifford Taylor (death); Colonel Matt Taylor; Jim Taylor; The Hooded Hunchback [Lt. Governor Morgan]; his gang [Muggsy; Rasp; others unnamed] (villains, introduction)
Synopsis
When Hetty Taylor died during the Gold Rush in California, his will specifically excluded any relative who lived or died in the state. Now the Astral Avenger must figure out the causes for the mysterious deaths of some of those relatives.
Reprints

First Line of Dialogue or Text
Oh boy - The 'true animal story' is on the air now!
Genre
humor

The Secret of the Buzzard's Revenge (Table of Contents: 7)

Oddity: Manhunter is called Rick Nelson once in this story.

[Adventure in the Past] (Table of Contents: 9)

The Golden Quest (Table of Contents: 10)

Genre
superhero
Characters
The Hourman [Rex Tyler]; Jimmy Martin; Professor Q [David Manders] (villain, WABX Radio President)
Synopsis
A sinister voice over the radio airwaves every evening asks a seemingly innocent question of the listening public, but, as the Hourman and Jimmy discover, this question is followed up the very next day with a major crime that answers the question!

Jimmy Martin wears his Hourman costume in the story, which also states that the Miraclo Ray gives the Hourman the strength of 50 men. Oddity: although the villain's name is called David Manders, the door to his office reads "J. J. Manders".

First Line of Dialogue or Text
Boy - That's the way to protect the law...
Genre
humor

Bells of Madness (Table of Contents: 17)

Genre
superhero
Characters
The Sandman [Wesley Dodds]; Sandy [Sandy Hawkins]; Lois Mansfield; Frank Scata; Martha Mansfield (death); Ernest Mansfield (villain)
Synopsis
Sandman and Sandy pry into the affairs of a mysterious family that has had a history of many of its members going mad and committing suicide.
Reprints