First Line of Dialogue or Text
Here are more of my adventures when I was a kid... -- You'll like this story!
Genre
adventure
Characters
Terry Lee

Cover features panels from the comic 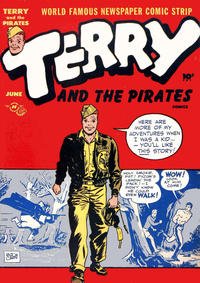 There's one long story divided into 3 chapters; it continues from the previous issue, and on into the next issue. Chapters 2 & 3 have their own titles.

Danger Is Here (Table of Contents: 5)

The Isle Where Women Rule! (Table of Contents: 6)

The pages are numbered 8-13. It's part 2 of a story that was intended for Boy Explorers #3 before the title was changed to Terry and the Pirates.

The Guy in the Glass House! (Table of Contents: 7)