On-sale date from copyright registration, confirmed by promo in The Inferior Five # 5..

The Sinister Lives of Captain Skull! (Table of Contents) 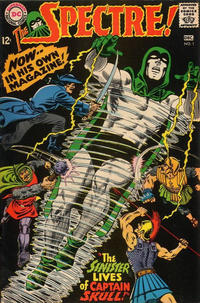 The Sinister Lives of Captain Skull! (Table of Contents: 1)

Genre
superhero
Characters
The Spectre [Jim Corrigan]; Captain Skull (villain)
Synopsis
The use of an experimental anesthetic on a sniper-shot ambassador causes him to be possessed by his ancestor, an 18th century pirate named Captain Skull who has received strong supernatural powers in the process. Only the Spectre can stand against him.
Reprints
Keywords
pirate

Job Number
6568
First Line of Dialogue or Text
I always mess up my paint jobs and get paint all over everything.

Title of feature is misspelled in the issue.