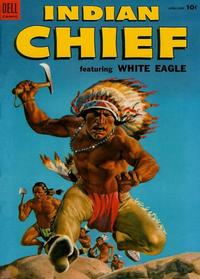 A Warrior's Name (Table of Contents: 1)

Story is on inside of front and back covers and in black and white.
Profile of kid and rather long fingers, and inklines of body points to Maxon. He had one story in #6, and also many "Young Hawk" stories in Lone Ranger Comics. Even some early Tarzan stories.

Indian Chief White Eagle and Danger in the North (Table of Contents: 2)

John Daly is credited on Indian Chief by Jerry Bails' Who's Who. This artwork compares best with his signed story "Poison Allard's Last Draw" in Western Fighter #2, with the thin cheekline in profile, eyes that really don't look at anything. Also compares well with early DC's Aquaman stories on the faces. He changed much from his early drawing in True Comics, but his faces can be recognised, like the Indian on page 34 in True Comics #1.

Gollub is credited on Indian Chief by Jerry Bails' Who's Who. This is identical to his credited story in Four Color #290, first in this series. The realistic horses are similar, and round, edgy faces with quite visible nostrils, wavy mouth and often smiling.

No circulation figures given.