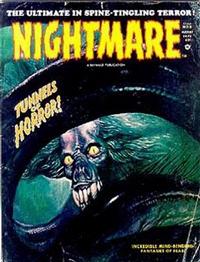 Andras: The Grand Marquis Of Hell! (Table of Contents: 1)

The Tunnels Of Horror (Table of Contents: 6)

Photos used as background art were taken by Al Hewetson. This story also caused a falling out between friends Hewetson and Shores when Shores became angered over what he regarded as a vindictive ink job by Adkins, who was apparently angry over Skywald’s low pay rates. Shores demanded a house name {Jim Elder} be used instead of his and announced that he’d never work for Skywald again. Hewetson spent two years rebuilding bridges with Shores until in early/mid-1973, Shores agreed to do another Skywald tale. Unfortunately, Shores died before actually beginning the artwork.

Tales From The Crypt (Table of Contents: 8)

Hung Up (Table of Contents: 9)

The Sting Of Death (Table of Contents: 10)

The Weird And The Undead (Table of Contents: 11)