On-sale date from 1967 Periodicals, Copyright Office, Library of Congress.
This issue has variants:

The Legion of the Living Lightning! (Table of Contents)

Possible Severin inks per Nick Caputo, December 2017; the original indexer credited the pencils to Jack Kirby and the inks to Severin and Trimpe. 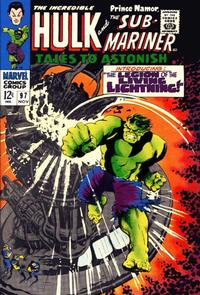 The Sovereign and the Savages (Table of Contents: 1)

First Line of Dialogue or Text
You are a fool, Plunderer, to think that these seething bands...
Genre
superhero
Characters
Sub-Mariner [Namor]; Lady Dorma; Lord Vashti; Swamp Men; Plunderer [Edgar Plunder] (villain); Ka-Zar (cameo, flashback); Zabu (saber-toothed cat, cameo, flashback) ; X-Men [Cyclops; Marvel Girl [Jean Grey]; Beast; Iceman; Angel] (cameo, flashback); Logar
Synopsis
Namor is on Skull Island in the Savage Land as a prisoner of the Plunderer. The villain tries to entice the Sub-Mariner into becoming his partner in world conquest by trying to impress him with his powerful vibra-gun constructed from Plunderstone (the Savage Land's version of vibranium). When the local Swamp Men attack, Namor is freed and the Plunderer's base begins to burn to the ground. Namor escapes from the inferno but not in time to stop the Plunderer from escaping in his powerful submarine. The villain decides to attack Atlantis in retribution for all of the trouble Namor has caused him.
Reprints
Keywords
Antarctica; Plunderstone; Savage Land; Skull Island; vibra-gun

Welcome to the Wonderful World of Marvel Madness! (Table of Contents: 2) (Expand) /

The Legions of: The Living Lightning (Table of Contents: 3)

First Line of Dialogue or Text
Leaping into the air, via the most powerful legs in all the...
Genre
superhero
Characters
Hulk [Bruce Banner]; Rick Jones; Teen Brigade; Glenn Talbot; Thunderbolt Ross; Lord of the Living Lightning (villain); Betty Ross (cameo, photo)
Synopsis
The Hulk rescues a downed pilot and ends up being captured and brainwashed by a subversive militia group known as the Living Lightning.
Reprints

At the end of the Hulk segment in Tales to Astonish #96, the High Evolutionary sets everything back to normal, as if it never happened, which results in the Hulk returning to Earth at the start of this story.

First Line of Dialogue or Text
Dear Stan, I became a Marvel connoisseur over two years ago while...
Characters
Sub-Mariner [Namor]
Reprints