The cover for this issue was intended to highlight the story "The 13 Dead Things" which didn’t actually appear until Psycho #15. 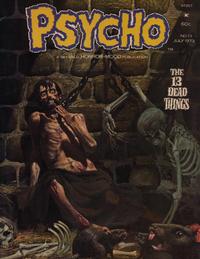 Prologue to Horror (Table of Contents: 1)

The Day That Satan Died (Table of Contents: 2)

Monster, Monster in the Grave! (Table of Contents: 4)

Let's All Drink to the Death of a Clown (Table of Contents: 6)

When Dies a Lunatic... So Dies a Heap (Table of Contents: 7)

Genre
horror-suspense
Characters
Heap
Synopsis
The Heap is taken in by his parents to live as normal a life as a horrific looking monster can.

The Heap series ended, but was planned to be relaunched (to Al Hewetson's chagrin) due to reader demand. Skywald folded though, before this could happen.

A Taste of Human Flesh (Table of Contents: 8)

The Horror Within and Without (Table of Contents: 9)

Adaptation of the story "City of Yesterday" by Terry Carr. Originally intended for the aborted Science Fiction Odyssey #1.

The Taste of Carrion (Table of Contents: 11)

Genre
horror-suspense
Synopsis
Brief retelling of the movie "The Mummy".