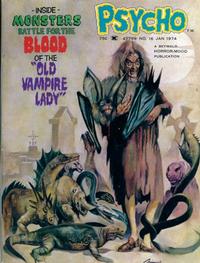 Features a guest "Comics Opinion" by Christopher Lee, which was actually an unused segment of the interview with Lee that appeared in Nightmare #17. In a classic comment, Lee ventures that comic characters, like the Human Gargoyles, wouldn’t work in the context of films.

Monster, Monster Rise from the Crypt (Table of Contents: 3)

...They Lived in Darkkos Manse! (Table of Contents: 4)

The Thing with the Red Ribbon in Its Hair (Table of Contents: 5)

Dead - But Not Yet Buried: Edgar Allan Poe (Table of Contents: 6)

The Thing in the Box (Table of Contents: 7)

Hunger of the Slaughter-Sludge Beasts! (Table of Contents: 8)

A Tale in Old Egypt: The Premature Burial (Table of Contents: 9)

The monster in the story is identical to the monster depicted on the cover for #18.