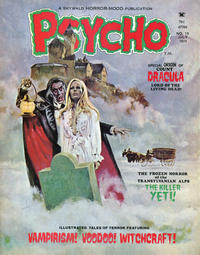 The Son of Lord Lucifer (Table of Contents: 2)

Lady Satan's series moved over from Scream for its last appearance. This character, as well as Skywald's version of the Heap, would be revived in 2003 in John Gallagher's Bedlam fanzine from Great Britain.

The Yeti (Table of Contents: 4)

Adaptation of the short-story "Ligeia" by Edgar Allan Poe.

Art from "The Saga of the Victims". Profile and photo of comic book artist Luis Collado. Also contains a letter from Christopher Lee reacting favorably to the interview with him that appeared in Nightmare #17.

Hell Is on Earth! (Table of Contents: 8)

Scenes from the Great Classic Horror Movies (Table of Contents: 10)

Photos and art from various stories.