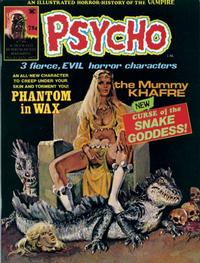 People of the Dark (Table of Contents: 1)

Frontispiece. Consisted of a brief bit of prose from a horror writer {in this case, Robert E. Howard} and a full page illo for that bit. At least 12 of these pages were completed but only two saw print.

Midnight in Wax (Table of Contents: 2)

The Phantom of the Dead / comic story / 10 pages (report information)

César López was miscredited as artist on the first page of this story. The real artist, Josep Maria Martín Saurí, appeared on the credits page as Bob Martin.

Profiles on artists Gene Day and Augustine Funnell. A ‘Horror-Mood Character Vote’ in which readers could vote on their favorite continuing character was included. ‘The Little Horror-Mood Shop Of Horrors’—a 5-page catalog of novelty items similar to Warren’s Captain Company—begins appearing this issue.

The Curse of the Snake Goddess (Table of Contents: 4)

Portfolio of the Master Criminal, the Vampire (Table of Contents: 5)

With the exception of Day, all art is from previous stories.

A Garden of Hellish Delight (Table of Contents: 6)

The Werevampirewolf (Table of Contents: 8)

The Man of the Crowd (Table of Contents: 9)

The Mummy Khafre, Part 2: The Murderess (Table of Contents: 11)