Publisher: Israel Waldman; Herschel Waldman. Most stories from #1-4 do not list a writer but Hewetson wrote all of them. Additional and new Skywald data by Richard Arndt from his Complete Skywald checklist. Used with permission. 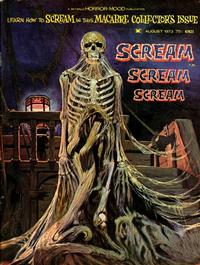 Prologue To A Scream (Table of Contents: 1)

Frontispiece. According to Hewetson’s introduction, Scream #1 was put together in response to readers’ opinions as expressed in the Bunch Of Questions survey and was Phase 3 of the Horror-Mood.

Text article with one photo.

Where Lunatics Live (Table of Contents: 7)

The Skeleton In the Desert (Table of Contents: 8)

The Tale Of The Perfect Crime (Table of Contents: 9)

The Comics Macabre (Table of Contents: 10)

Hewetson sent a copy of the story to Wertham, with whom he corresponded for a number of years but, according to Hewetson, Wertham didn’t get the point.

The Strange Paintings Of Jay Crumb (Table of Contents: 11)