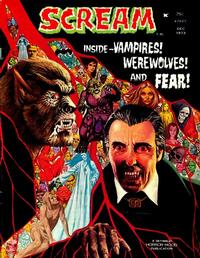 Frontispiece. This page functions as a title page or introduction for The Phantom of the Opera.

This title page as an extract of two panels from part 2 of The Phantom of the Opera.

The Phantom of the Opera Chapter One …The Good…The Bad…And the Weird (Table of Contents: 3)

The Phantom of the Opera / comic story / 9 pages (report information)

Adaptation of the novel "The Phantom of the Opera" by Gaston Leroux.

The Phantom of the Opera Chapter Two …The Torture Chamber… (Table of Contents: 4)

Dave Sim sends in a letter. The letters’ page also features a biography and photo of Domingo Álvarez Gómez.

What Is Evil and What Is Not? (Table of Contents: 6)

The Fall of the House of Usher (Table of Contents: 7)

Adaptation of the short-story "The Fall of the House of Usher" by Edgar Allan Poe.

This page features a sequence of five images with blank speech and captions to fill in. "The best 5 entries we receive will win an advance copy of the next issue..."

This advertisement includes cover images of available back issues of Scream, Psycho and Nightmare on the first page. The second page promotes back issues of The Crime Machine, Hell-Rider, Jungle Adventures, Butch Cassidy (sold out) and Bravados (one issue sold out). It also promotes Library Boxes for back issues.

This page is a photo article explaining the origin of Nosferatu in F.W. Murnau's 1922 silent film, also promoting a review of the film by Ed Fedory in Psycho #16.

The Tales of Another Nosferatu... (Table of Contents: 12)

First Line of Dialogue or Text
In Nightmare there are so many monsters...

Inside back cover. "A scene from: Hell Hath No Face by Ricardo Villamonte in the current Nightmare".

First Line of Dialogue or Text
These men are Nosferatu's monsters

This promotion is composed two-thirds of the first page of "The Tale of Another Nosferatu..." with a new heading and the addition of "in Scream" at the end.