The scarred man on the cover is modeled on actor Peter Cushing. 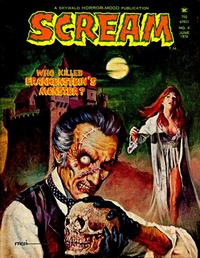 The Vampire of the Opera (Table of Contents: 1)

Ms. Found in a Bottle (Table of Contents: 2)

Adaptation of the short-story "Ms. Found In A Bottle" by Edgar Allan Poe.

Frankenstein 2073: The Death of the Monster (Table of Contents: 3)

The end of the "Frankenstein, Book II" serial, continued from Nightmare #13. Part 3 of 3.

César López biography and photo. His name was misspelled as Zesar Lopez in this article, confusing it with César Álvarez Cañete's pen name, Zesar.

What Is Horror? (Table of Contents: 6)

The Saga of the Victims / comic story / 20 pages (report information)

Genre
horror-suspense
Synopsis
Two college age girls, one white and one black, ventures into the basement of their school only to discover a nightmare world of pain, madness and degradation.
Reprints

Continued in next issue. For five episodes the girls went on a nightmarish rollercoaster ride through virtually every horror cliché one could imagine. Hewetson stated that his goal was to write a horror story that nobody could figure out the ending to ahead of time. Then Scream was cancelled with a single episode left unpublished and fans would spend years wondering how Hewetson had planned {or even if he could have planned} to tie it all up. Finally, in the spring of 2004, British small press publisher John Gallagher of Chimera Arts, with the permission of the late Al Hewetson & artist Jesus Suso Rego, would publish the entire saga, including the previously unpublished 17 page final chapter {with Gallagher himself filling in a few missing panels}. Lo and behold, Hewetson & Suso had come up with an ending that actually worked... and fulfilled Hewetson’s desire to lead the reader down unfamiliar paths.