The Saga of the Victims! (Table of Contents) 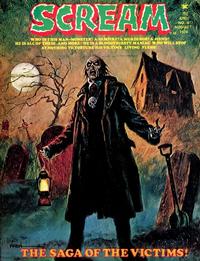 The Tell-Tale Heart (Table of Contents: 2)

Adaptation of the short-story "The Tell-Tale Heart" by Edgar Allan Poe.

My Prison in Hell (Table of Contents: 4)

Suso: Horror-Mood Artist of the Month (Table of Contents: 6)

The Mechanical Cannibals (Table of Contents: 7)

Adaptation of the short-story "From Fanaticism, Or for Reward" by Harry Harrison from the magazine Analog (Mar 1969). Originally done in 1971 and had been intended to appear as a 10 page story for the aborted Science Fiction Odyssey #1. It was expanded to 11 pages by inserting a pin-up page taken from what was intended to be the frontispiece. The original author, Harry Harrison, was one of the original EC horror artists.

The Saga of the Victims / comic story / 20 pages (report information)