My Kind of Music! (Table of Contents) 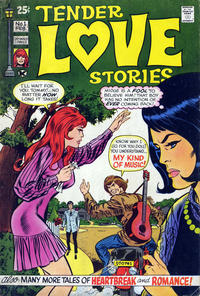 My Kind of Music! (Table of Contents: 1)

Genre
romance
Characters
Midge Parker; Tommy Tucker; Celia French; Fred Boswell
Synopsis
Tommy leaves Midge to make his mark in the music world, but writes to let her know that things are going well and he is building for their future. But Midge becomes concerned when the letters stop and the phone doesn't ring. Eventually she tries going out with someone else, but her heart still belongs to Tommy. She decides to track Tommy down even if she makes a fool of herself. When she finds Tommy, she discovers he is playing in a dive and was to ashamed to let her know he was a flop.

Doomed to Silence! (Table of Contents: 2)

Genre
romance
Characters
Ken Blaine; Linda Johnson; Nance Johnson
Synopsis
Linda and Nance performed a two sisters dance act, but the older Nance always treated Linda as a kid around men even though Linda was eighteen. Linda came to realize that Nance did it to cling to her fading youth. She confronted Nance about it and Nance pleaded with Linda to give a last chance with Ken. Despite Linda's feelings for Ken, she agreed for her sister's sake. But one night when Nance was out, Linda walked into the living room in her lingerie to discover that Ken was there looking for Nance. Struck by Linda's womanly features, Ken called Linda the next night to ask her out.
Reprints

Left at the Altar! (Table of Contents: 3)

Genre
romance
Characters
Jim Mayhew; Joan Stevens; Dave Norton
Synopsis
On the day of her wedding, Joan receives a telegram telling her that her fiance couldn't go through with it and was leaving for Australia. Later, when Joan takes a vacation, she decides to do to a man what was done to her. She picks Dave as her target and they spend the following days doing everything together. The wedding date is set for the next day at the resort, but Joan leaves on the train that evening. She is having second thoughts about her plan and gets off at the next station. Then she bumps into Dave who had been executing the same plan she had, but had also had second thoughts.
Reprints

Art heavily revised/redrawn from the original by Andru/Esposito. Info per Nick Caputo, September 2015.

Genre
romance
Characters
Frank Chisolm; Sally Bruce; Gilbert Trayne
Synopsis
Frank and Sally want to get married, but Frank doesn't earn enough yet to support them. He gets a new job that might make it possible, but he has to spend a year in South America. While Frank is gone, Sally's friend convinces her that she should have some fun and invites her to a party. At the party, Sally meets Gilbert and starts dating him. Eventually, Gilbert wants Sally to be his girl and Sally feels she loves him. When Frank returns home earlier than expected, she realizes it is Frank she loves, but she can't bring herself to tell Frank about Gilbert.
Reprints

Every Girl Can Be Beautiful! / letters page / 2 pages (report information)

Would He Ever Be Mine? (Table of Contents: 6)

Genre
romance
Characters
Carol Ashley; Eric Thompson; Aunt Bella; Joey; Fran; Mr. Hadly; Ralph Benton; Joe Wilson; Rufe Tenton
Synopsis
Since grade school, Carol had enjoyed being passionate with lots of members of the opposite sex. After taking a job as a secretary in an insurance firm, she met Eric and forced herself to be the sweet girl he thought she was. Then she met Ralph and succumbed to his intense, demanding presence. But Ralph used her to help set up two men to be robbed at a hotel. Realizing after the fact what had happened, Carol confessed her role in the crime to Eric, then to the police.
Reprints