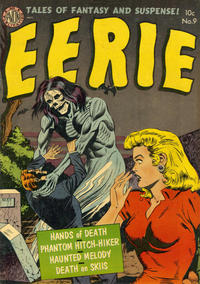 The Phantom Hitch-Hiker (Table of Contents: 2)

Genre
horror-suspense
Synopsis
John Morley has been stealing money from the fortune of his ward, Gail. As she is about to find out, he lets her car crash down a bridge. Morley, however, is haunted by the hitch-hiking phantom of Gail.
Reprints

The Hands of Death! (Table of Contents: 3)

Genre
horror-suspense
Synopsis
Violinist Erik Dulan can’t use his hands anymore and would give anything to be able to play again. He meets with Dr. Necros who lets him chose a new pair of hands from a group of zombies he commands. Dulan has a terrible price to pay: the new hands have a will of their own and commit criminal acts.
Reprints

The Thing from the Grave (Table of Contents: 4)

Death on Skis! (Table of Contents: 5)

Genre
horror-suspense
Synopsis
American tourist Johnson is on skiing holiday in the Bavarian Alps. A guide warns him to not take the Northern slope. The ghost of a suicidal father who lost his son to a careless ski racer is out there for revenge. Johnson does not heed the warning and has to race a skiing skeleton for his life.
Reprints

drawn while Kubert was in the Armed Forces (per Kubert); artwork is signed "Joe Kubert, Sonthofen, Germany"

The Haunted Melody (Table of Contents: 6)

Genre
horror-suspense
Synopsis
Frederic Parker is a promising young pianist haunted by the “raindrop” prelude of his namesake Frederic Chopin. Every time he plays it, the ghost of Chopin’s muse Nona appears. Parker falls in love with Nona, but she’ll be his undoing.
Reprints

The Haunted Cave (Table of Contents: 7)

Princess of the Subway (Table of Contents: 8)

Genre
horror-suspense
Synopsis
On a subway train, Dave Bartlet gets into a fight with a mysterious woman and her company. They make the train halt and let fish people in who attack the passengers. Bartlet overpowers the woman and brings the subway back to safety. No one believes him until he unmasks the woman.
Reprints