First issue of this title to be released on a Tuesday, per DC Comics' new distribution methodologies of 2020.

All advertising in this issue is for DC or Warner product. No non-house ads or activity pages appear. Of those ads, 13 are for DC Graphic Novels for kids, one for a DC Graphic Novel for "middle grade", and one for the Legion of Superheroes (Animated) Complete Series on Blu-ray. 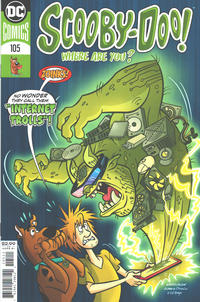 New story. This story takes place in Metropolis, where the iconic Daily Planet Building is seen from a upper floor window. Though there are no references to Superman, any of his supporting characters, or Metropolis itself in the story.

A rare Scooby-Doo story penciled by Dan DeCarlo – best known for his classic work on Archie comics! DeCarlo’s “influence of style” is clearly evident in this story, with an image of “Ashley Stunn” looking just like Betty Cooper (page one, panel three), square-jawed Fred having the “rounded jawline of Archie” – looking like a drawing of Archie Andrews with Fred’s blonde hair and sans Archie’s freckles (page five, panel one), and all of the incidental characters (to one extent or another) looking as if they stepped out of an Archie comic.