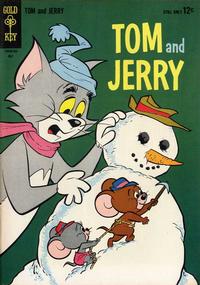 To Build a Better Mousetrap (Table of Contents: 3)

First Line of Dialogue or Text
Remember, friends, our famous quotation for today...
Genre
anthropomorphic-funny animals
Characters
Tom; Jerry; Tuffy; Mr. Acme and his aide; Fred the test mouse
Synopsis
Tom tries to get rich by inventing a better mousetrap, but fails. Jerry and Tuffy use his ambition against him to get cheese.
Reprints
Keywords
get rich quick; inventing

First Line of Dialogue or Text
Hey, you guys! Come here on the double!
Genre
anthropomorphic-funny animals
Characters
Tom; Jerry; Tuffy; moths
Synopsis
Jerry and Tuffy hatch some moths, which panics Tom, who is very proud of his winter fur. Jerry and Tuffy resolve the problem in return for a promise of treats.
Reprints
Keywords
fur; moths

Use of the exclamation “Ooo-hoo-hoo!” (page 3, panel 3) suggests the possibility of this story having been written by Cecil Beard and Alpine Harper, of “Fox and Crow” fame.

All Kinds of Time (Table of Contents: 5)

The Successful Failure (Table of Contents: 6)

© 1964, Western Publishing Company, Inc. Not MGM characters. Despite a host of MGM-owned “guest stars” to choose from (Spike and Tyke, Barney Bear, Droopy, Little Quacker, etc.) in order to satisfy a postal requirement for second class subscription mailing rates, Western Publishing utilized its own creation, Professor Putter, for this purpose in the Tom and Jerry title beginning with issue #219 thru #230. The Professor Putter feature had originally appeared, for the same purpose, in The Three Stooges (Dell) #6-9, continuing in The Three Stooges (Western) #10-16, before moving to Tom and Jerry in 1964. Putter returned to The Three Stooges in reprint form in 1968. Professor Putter reprints continued in service to postal regulations as late as Scooby Doo… Where Are You! (Western) #15-16 and Scooby-Doo… Mystery Comics (Western) #17 in 1972-1973. Many of these stories were written by Carl Fallberg, though the dialogue in this case indicates Vic Lockman.

Statement of Ownership, Management and Circulation (Table of Contents: 7)

Statement of Ownership for September 27, 1963. Prepared by H.L. Anderson.

Swamped with Trouble (Table of Contents: 8)