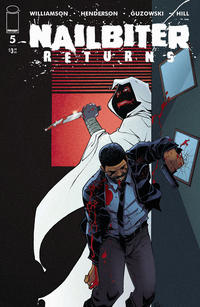 Preview of Nailbiter issue #6's cover artwork minus dressing with Next Issue text and on-sale-date.

Back Cover (Table of Contents: 7)

First Line of Dialogue or Text
The Nailbiter is back!