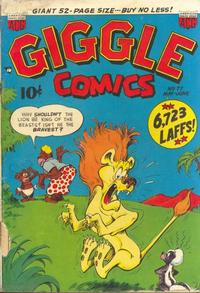 First Line of Dialogue or Text
Boys! I have decided who's to get the castle to haunt!
Genre
humor
Characters
Spencer Spook; Boss Spook; Bone Pile; Chief
Synopsis
Boss Spook selects Spencer to haunt a castle, which makes rival spooks Bone Pile and the Chief jealous.

A headstone in one panel reads: "Here in slumber, lies Richard Hughes. He went walking in winter without any shoes." Richard E. Hughes was the editor of Giggle Comics.

First Line of Dialogue or Text
Yippee! It's finally come out!
Genre
humor; anthropomorphic-funny animals
Characters
Doodles Dog
Synopsis
Doodles wants to buy a new car called the Zam 8 which doesn't have a manual transmission, but they are all sold out (the price was $875.23).

The Duke and the Dope / comic story / 8 pages (report information)

Genre
humor; anthropomorphic-funny animals
Characters
The Duke; The Dope
Synopsis
The Dope accidentally books himself and the Duke on an ocean cruise rather than a ferry trip. They are stranded on a desert island, are rescued by another ship, and then stranded again after the Dope irritates the ship's captain.

First Line of Dialogue or Text
Now give me your honest criticism, Mercedes!
Genre
humor; anthropomorphic-funny animals
Characters
Francois Feline; Mercedes Canary; Murgatroyd Dog; Bonnie
Synopsis
A salary cut for their owner means one of the family pets must go. Francois, Mercedes, and Murgatroyd compete to show they are worth keeping.

Room for Bertie (Table of Contents: 6)

First Line of Dialogue or Text
Whoopee!!! Three cheers for my Uncle Dippy!
Genre
humor; anthropomorphic-funny animals
Characters
Gabby Gander; Foxy
Synopsis
Gabby's uncle sends him two elephants so he can open a piano key business. Foxy schemes to take over but regrets it when he learns the elephants won't grow tusks for 30 years and they eat $1000 worth of food each week.

Pumphrey and the Pup (Table of Contents: 8)

First Line of Dialogue or Text
Hey, howdy George!
Genre
humor; anthropomorphic-funny animals
Characters
Finnegan; George
Synopsis
Finnegan's pal George enlists him in a scheme to obtain bones from O'Malley the butcher. This requires much work: digging worms, fishing, and taking the fish to O'Malley (to trade for bones), only to discover it's Sunday and the butcher is closed.

The art does not look like it was done by the usual Superkatt artist, Dan Gordon. Resembles the work of Ken Hultgren or Lynn Karp.