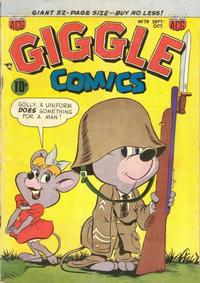 The Squire and the Chip / comic story / 6 pages (report information)

First Line of Dialogue or Text
W-What was that?
Genre
humor; anthropomorphic-funny animals
Characters
Squire Squirrel; Chip the Chipmunk; Mr. Twiddypretty; Jason the butler; Slow-Foot the Bear
Synopsis
Elderly Mr. Twiddypretty wants to emulate his hero Bozzin of the Jungle. The Squire and Chip try to dissuade him of this idea.

The Frog and the Pelican (Table of Contents: 6)

The Duke and the Dope / comic story / 9 pages (report information)

Genre
humor; anthropomorphic-funny animals
Characters
The Duke; the Dope
Synopsis
The Dope battles some pirates for possession of a treasure map.

Catching the Catcher! (Table of Contents: 10)

Bottom 1/3 of page is Statement of Ownership.

First Line of Dialogue or Text
The one thing I like about this neighborhood is that it's peaceful and quiet!
Genre
humor; anthropomorphic-funny animals
Characters
Piggy; Foxy
Synopsis
Piggy wants to win a $10,000 for a statue he's creating. His neighbor Foxy dislikes the noise.

First Line of Dialogue or Text
Oh, oh! And just when I have a very important engagement in town!
Genre
humor; anthropomorphic-funny animals
Characters
Foxy

This character is probably not intended to be the same "Foxy" from the "Our Pal Piggy" feature since they look completely different (one is gray and one is red).

First Line of Dialogue or Text
Now listen to me!
Genre
humor; anthropomorphic-funny animals
Characters
Spud; Mr. Zilch; Polly; Miss Pert
Synopsis
Spud's owner Miss Pert can't trust him alone at home so she plans to leave him at the pet shop. She decides to buy a parrot to keep an eye on Spud and report on his bad behavior.