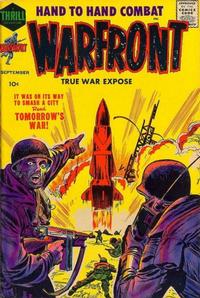 contents page includes four panel intro of opening tale, although it officially starts on the next page.

Genre
war
Synopsis
Here is the story of how one man tried to stop tomorrow's weapon.

No indication of creative team. Pencils and inks by Bob Powell with possible help from Howard Nostrand. Gene Reed 11/3/2010.

The Gamble (Table of Contents: 3)

Genre
war
Synopsis
You think missiles are new? The Sergeant knows better...he just happened to run into them in the last war.

Genre
war
Characters
"Black Mike" Fuselli
Synopsis
He was tough! He knew all the angles in the book...and it wasn't "Mein Kampf."

Genre
war
Synopsis
He had one shot left! Hed had to make it pay off!

No indication of creative team.

On Guard (Table of Contents: 6)

A page of military facts with illustrations.