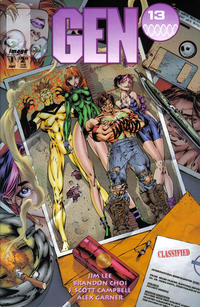 The final two pages of the story are a double-page spread. Most reprints of this story condense the final two pages into one page, thus making the page count 23 rather than 24 without cutting any material out.

Centerfold pull-out poster. Folds into three parts. Included in both printings but not in the newsstand edition.

Design sketches for the Gen 13 characters. A preliminary cover sketch includes the original title of the series "Gen X." Included in second printing.

Synopsis
Information on the creators and also on how to order Gen 13 #0 ashcan. Included in the second printing.
Reprints