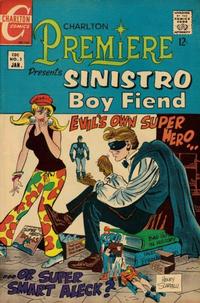 Too Many Happy Endings! (Table of Contents: 3)

A caption in the final panel says: "Join us in the next epic adventure of Sinistro Boy Fiend. This clever, dedicated champion of infamy will once again attempt to raise aloft the black flag of villainy!"

Now You Can Buy Fords, Chevrolets, Dodges Below Wholesale!! (Table of Contents: 12) (Expand) /