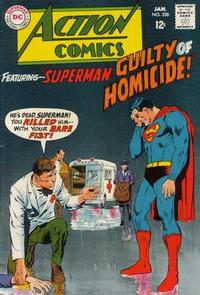 Genre
superhero
Characters
Superman; Dr. Frost; Ron Noble; "Bullets" Stacey; Jimmy Olsen (cameo)
Synopsis
Ron Noble, the secret head of the International Crime Exchange, plots to frame Superman for accidental homicide in a boxing exhibition, but his colleague Dr. Frost arranges it so that Noble is truly killed so that Frost can take over.
Reprints

Genre
superhero
Characters
Supergirl; Superboy; Zor-El; Allura
Synopsis
Superboy is accidentally swept up by a space-probe belonging to his uncle Zor-El. He is taken to Argo City where he meets young Kara, his cousin, but circumstances ensue to cause everyone to later forget that the meeting ever took place.
Reprints
Keywords
Argo City; Green Kryptonite; Krypton