All advertising in this issue is for DC or Warner product. No non-house ads or activity pages appear. Of those ads, 13 are for DC Graphic Novels for kids, one for a DC Graphic Novel for "middle grade", and one for the Legion of Superheroes (Animated) Complete Series on Blu-ray.

Indicia inaccuracy: Indicia claims reprint material that is copyright 2002 and 2010, but there is only one reprinted story in this issue – and it is from Scooby-Doo (DC, 1997 series) #62 (September 2002). There is no reprint material from 2010. This is the second consecutive issue of this title where reprint content is inaccurately stated in its indicia. (See issue #105).
Keywords
misidentified reprint content in indicia

[The Holographic Horror of It All!] (Table of Contents) 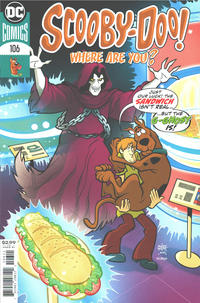 Trick of the Light (Table of Contents: 1)

New story. "Randy Narwhal", the holographic artist, is a name-parody of pop-art-era legend Andy Warhol. "Arthur Nouveau" is a pun on the "Art Nouveau" style.

Hear No Evil (Table of Contents: 2)

"J. Paul Hughes" is a name-parody amalgam of of real-life counterparts J. Paul Getty and Howard Hughes. The Hughes' offspring, "Luke and Laura", are likely parody-named after the famous characters from the TV soap opera "General Hospital".

This story, originally from 2002, serves to show the great advances in technology over a relatively short period of time (2002 to 2020 when the story was reprinted). Among Hughes’ accomplishments are (as quoted): “This wristwatch is actually a digital camera capable of producing a photo with 7.1 million pixels!” or “This is a computer as powerful as the fastest desktop, yet barely the size of a credit card!” Neither seems quite as unlikely or distant in 2020 as it would have in 2002.