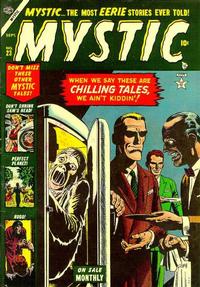 Job Number
C-720
Genre
horror-suspense
Synopsis
A man wants to go to Jivaro country so he can acquire a shrunken head for his collection of horror memorabilia but is afraid of having his head shrunk, so he hires a scientist to treat his head so that it is unshrinkable. The chief captures him and makes him a deal that if they can't shrink his head, they'll give him one of theirs and let him go. He accepts, and they fail to shrink his head so let him go, but they succeeded in their process with the rest of his body.
Reprints

The Perfect Planet (Table of Contents: 5)

This is part one of a two-part story. The caption in the last panel states: "Don't miss the astounding sequel to this tale.."The Great Migration"..in the next issue of Mystic!". However, the story instead appears in Astonishing #27, October 1953. Info per Chris Brown and Atlas Tales.

Job Number
C-877
Genre
horror-suspense
Synopsis
A mother tells her daughter that the man in the moon causes the tides but her daughter doesn't believe her. Afterward, the moon gets destroyed by a comet impact and the seas grow calm. Years later, the little girl has grown to have a daughter of her own and she tries to convince her that there used to be a moon which caused the sea to swell. She is shocked when her skeptical daughter says to her "Oh mother, would you have believed a story like that if your mother had told it to you?"
Reprints

Job Number
C-663
Genre
horror-suspense
Synopsis
An old miser who is mean to the boys at a neighboring orphanage gets what's coming to him when he poisons one of the orphans' dogs.
Reprints