They Wait in the Caves! (Table of Contents) 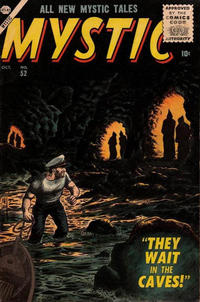 The Effigy (Table of Contents: 1)

Job Number
K-298
Genre
crime; fantasy-supernatural
Synopsis
A criminal takes an effigy from a voodoo cult so that they cannot use it to compel him to surrender himself to the police.
Reprints

Job Number
K-327
Genre
science fiction
Synopsis
When the communists come up with a machine that can read minds, NATO takes a short soldier and supplies him with a fake head that contains instructions for leading the commies into a trap.
Reprints

The Secret of the Iron Needle! (Table of Contents: 3)

Job Number
K-381
Genre
science fiction
Synopsis
Space explorers realize, when the planet they are examining runs down, the giant needle they've found is not a natural phenomenon but the winding key of a giant toy.
Reprints

The Last Laugh! (Table of Contents: 4)

Job Number
K-321
Genre
fantasy-supernatural
Synopsis
A ruthless businessman is sure that he is the reincarnation of someone important from medieval times, but when he does journey back into time he finds that he was...the court jester.
Reprints

They Wait in the Caves! (Table of Contents: 6)

Job Number
K-284
Genre
horror-suspense
Synopsis
A man finds an island abundant with pearls and gives the location to his friend. When the friend arrives, the natives destroy his boat to keep him from revealing the island's location to anyone else.
Reprints

The Land of Missing Persons (Table of Contents: 7)

Job Number
K-220
Genre
science fiction
Synopsis
A mad scientist uses a ray to capture planes that fly over his hidden mountain fortress to enslave workers in order to build his futuristic city for him. He is arrested and his city destroyed by a detective.
Reprints

Title, page count and job number from www.atlastales.com. Wessler script per biblio info in Robin Snyder's The Comics Vol 28, No 5, May 2017.