He Walks in the Night! (Table of Contents) 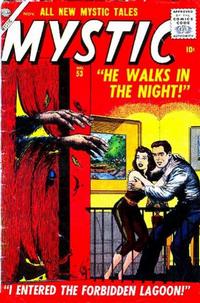 Inside the Locked Trunk! (Table of Contents: 1)

Job Number
K-446
Genre
fantasy-supernatural
Synopsis
A man tells his brother that there is a great treasure in a locked trunk that will one day be his if he remains with him but he refuses to allow him to look in the trunk. One day, the brother steals the key and looks in the trunk and finds a passage to another world where a girl is in the same predicament with her cruel sister. The man escapes back to his world and the girl follows him and they leave the brother's house to make their way in the world together.
Reprints

The Magic Carpet (Table of Contents: 2)

I Entered the Forbidden Lagoon! (Table of Contents: 3)

Job Number
K-459
Genre
horror-suspense
Synopsis
A man cheats his partner out of the pearls of a lagoon and the natives curse him until he gives the money back and the waters of the lagoon forgive him.
Reprints

The Threat! (Table of Contents: 4)

Job Number
K-426
Genre
science fiction
Synopsis
Aliens land and demand a representative from Earth to judge for worthiness to join the galactic federation. If the representative is deemed unworthy the planet will be destroyed. So the president sends...his little girl.
Reprints

a story similar to The Twilight Zone's "Steel" but in this story the human fighter defeats the robot.

He Walks in the Night! (Table of Contents: 6)

Job Number
K-409
Genre
horror-suspense
Synopsis
A man with mental powers threatens to destroy an inventor that has come up with a machine that could reveal his presence to the authorities, but when the evil man threatens the inventor's daughter, he shakes off the mental hold he has over him and knocks him out with the butt of his gun.
Reprints

The City That Sank! (Table of Contents: 7)

Job Number
K-400
Genre
science fiction
Synopsis
A pilot stumbles across a submersible city that raises above and lowers below the waves.
Reprints