The Room of Shadows (Table of Contents) 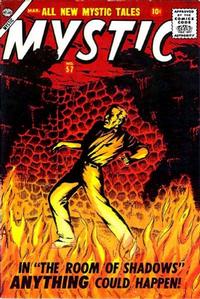 Trapped in the Ant Hill! (Table of Contents: 1)

Titles, page count and job number from www.atlastales.com. Plot similar to "Man in the Ant Hill" from Tales to Astonish #27.

The Midnight Visitor! (Table of Contents: 2)

Job Number
L-230
Genre
fantasy-supernatural
Synopsis
A writer is surprised when he is confronted by the villain from his best-selling novel.
Reprints

The Strange Prison! (Table of Contents: 3)

Job Number
L-281
Genre
fantasy-supernatural
Synopsis
A man finds himself in an underwater world where their doctors have converted his body to survive underwater. The king's daughter is taken with him and so wishes to marry him, but he only wants her dowry treasure chest and steals it. He passes out on the surface since he can no longer breathe air, and is captured and placed in prison. The king tells him he will serve a two year sentence for his theft and then the doctors will reverse their work and deposit him on the surface. The dowry consisted of a chest of seashells, which they use for currency, but would be worthless on the surface.
Reprints

He'd Rather Die Than Tell (Table of Contents: 4)

Job Number
L-238
Genre
fantasy-supernatural
Characters
Andrew Korvak
Synopsis
Andrew murders a man for a crystal ball but while fleeing the police he falls from a roof. Even then, the crystal remains unbroken and depicts the murder he committed.
Reprints
Keywords
crystal ball

Job Number
G-85
Genre
science fiction
Synopsis
A man's fascination with history leads him to build a time machine and travel to the past, but when he sees the dangers of time travel he destroys the machine and blueprints.
Reprints

The Room of Shadows! (Table of Contents: 6)

Job Number
L-301
Genre
fantasy-supernatural
Characters
Beldick; Chu Teh
Synopsis
Beldick discovers a Cambodian temple where within the Room of Shadows he can have his wishes granted by lighting a brazier but each time his wishes backfire and he accidentally burns down the room from lighting matches.
Reprints
Keywords
Cambodia; Room of Shadows

You Can't Hide from the Eye! (Table of Contents: 7)

Job Number
L-128
Genre
science fiction
Characters
Floyd Ryder; Larry Burden
Synopsis
Floyd builds a device which can spy on any place and projects its images on a television screen. Sharing his device with Burden's mob they plan a major bank heist, but Floyd's device has been transmitting its images to nearby television sets and his neighbours alert the police.
Reprints