War Games Act One Part 7 of 8 (Table of Contents) 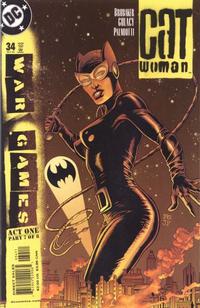 Selina learns that a meeting between two gangs is a set-up; she arrives to find all members killed by Mr. Freeze. She stops Freeze, but is distracted when she spots Spoiler on a nearby rooftop.

Spoiler explains that after Batman fired her from being Robin, she decided to prove her worth by implementing a Batman contingency plan to take over the gangs. But the plan failed because "Matches" Malone was a key player in it, and Stephanie hid her actions from Batman; not realizing that Matches was one of Batman's aliases.
Reprints
Keywords
bat-signal; cold gun; Dr. Thompkins East Side Clinic; East End; gang war; Gotham City