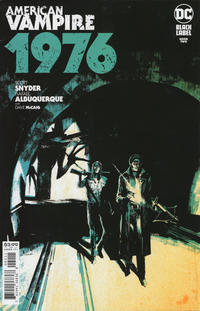 Part Two: "The Stuff of Legends" (Table of Contents: 2)

Two-pages with the series logo, illustration of a vampire with wings flying plus title on the first page with the credits on the second page.

Maybe You Just Need A Snickers (Table of Contents: 5) (Expand) /

The Other History of the DC Universe (Table of Contents: 6) (Expand) /

Be A Hero Wear A Mask (Table of Contents: 9)

Public service announcement from DC Comics promoting the wearing of medical masks with an illustration of Green Lantern, Cyborg, The Flash, and Aquaman standing behind Superman, Wonder Woman, and Batman.