Escape of the Fatal Five! (Table of Contents) 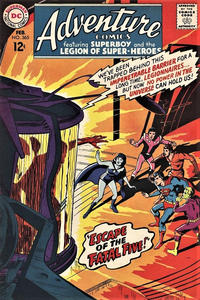 Escape of the Fatal Five! (Table of Contents: 1)

Genre
superhero
Characters
Legion of Super-Heroes [Karate Kid; Brainiac 5; Superboy; Cosmic Boy]; Shadow Lass (introduction)
Synopsis
The Legion is sent to Talok VIII to investigate its sudden belligerence, with its native heroine Shadow Lass, and fall into separate traps designed for each one of them.
Reprints

Part II: Mocked by the Master! (Table of Contents: 2)

Genre
superhero
Characters
Legion of Super-Heroes [Superboy; Brainiac 5; Karate Kid; Cosmic Boy]; Shadow Lass; Fatal Five [Tharok; Emerald Empress; Persuader; Validus; Mano]
Synopsis
The Legionnaires escape their traps, but their energy in doing so powers the Fatal Five's escape from the dimension into which they were flung after their last encounter with the Legion.
Reprints

The Origin and Powers of the Legion of Super-Heroes! (Table of Contents: 3)

First two pages were originally printed in Superman Annual (DC, 1960 series) #4, then reprinted with some alterations in Adventure Comics (DC, 1938 series) #316 with third and fourth pages, all of which were reprinted here with further alterations by Al Plastino, most notably in the Light Lass and Duo Damsel panels, and with the fifth and sixth pages added.

Origins and Powers of the Legion of Super-Heroes (Table of Contents: 4)