Related gag on back cover. 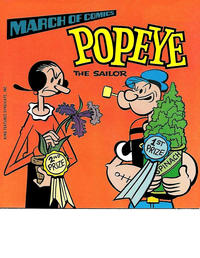 Nothing Doing (Table of Contents: 2)

First Line of Dialogue or Text
I'm gon'ter be a sailor when I grow up!
Genre
humor
Characters
Popeye; Wimpy (both as kids in short pants); The Sea Hag; Bernard (vulture); Poopdeck Pappy (in flashback)
Synopsis
Young Popeye and Wimpy take their first sea voyage, in a rowboat to the Sea Hag's island.
Keywords
kid-versions-of-characters; quest for excitement

The actual feature billing of this story is: "Popeye as a Little Boy". While Popeye and Wimpy are indeed portrayed (if awkwardly) as boys, the Sea Hag looks exactly the same as always, indicating that (as a witch) she ages at a different rate. Future characterizations are adhered-to, as Popeye has his first sea adventure (though without an assist from spinach) and, in the final panel, Wimpy develops a taste for hamburgers. Three tiers per page.

Find Six Mistakes in This Picture! (Table of Contents: 4)

[Find the Football] (Table of Contents: 5)

First Line of Dialogue or Text
Doofus is looking for his football.
Genre
humor
Characters
Doofus
Synopsis
Guide Doofus through a maze to find his football - or risk leading him to other unwanted items.
Keywords
maze puzzle

Theme continues from front cover illustration. Illustration shares back cover space with logo and ad copy for whichever firm is distributing the issue as a giveaway premium. Illustration comprises top third of page, lower two thirds can be blank if no named sponsor.