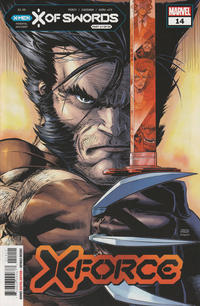 First Line of Dialogue or Text
Things are about to get busy.
Genre
superhero

X of Swords (Table of Contents: 3)

Text recap and illustrations of various X-Men. Occurs after the second page of the main comic sequence.

Credits, title, indicia and a black and white illustration taken from the front cover. Occurs directly after the recap page.