Pencils/Inks: The original art is signed by Al Williamson and has been listed frequently in
Overstreet, THE ART OF AL WILLIAMSON and elsewhere as: Pencils Al Williamson, Inks George Evans. 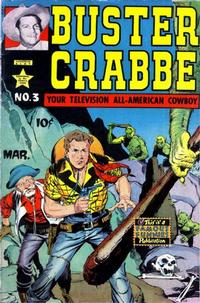 Inside front and back cover. Inside front cover also has indicia (states published bi-monthly).

Buster Crabbe and the Mankiller (Table of Contents: 2)

The Ogre (Table of Contents: 3)

Whiskers and the Ghoul Gang (Table of Contents: 4)

Art ID based on comparisons of Bob Powell's work for Harvey and other companies during this time.

Homer on the Range (Table of Contents: 5)

The Story of Rawhide in the West (Table of Contents: 6)

The Showdown (Table of Contents: 7)

Statement of Ownership (Table of Contents: 9)