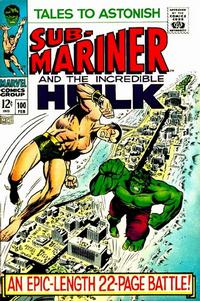 Let There Be Battle! (Table of Contents: 1)

First Line of Dialogue or Text
Hidden in a remote, undersea outpost, the embittered Sub-Mariner probes the...
Genre
superhero
Characters
Hulk [Bruce Banner]; Sub-Mariner [Namor]; Rick Jones; Glenn Talbot; Thunderbolt Ross; Betty Ross; Puppet Master [Phillip Masters] (villain)
Synopsis
Looking for an ally in his war with the surface world, Namor decides to try to recruit the Hulk to his cause. The only problem is that the Puppet Master has chosen this moment to mind-control the Hulk and sends him to defeat his old aquatic enemy.
Reprints
Keywords
computo-viewer; Miami

Book-length story with Hulk and the Sub-Mariner in this 100th issue. Roger Brand inks per Dan Adkins interview in Comic Book Artist #14.

Letters from Dennis Druash, Gregory Pasternack, Johnnie Pierce, and Jeb Bolan. The Sub-Mariner and Hulk images are both from Tales to Astonish #95.