Though some people consider this Neal Adams' first work on Batman, his cover of The Brave and the Bold #75 featuring Batman and The Spectre precedes this issue by nearly three months (information from "Crazy Ed" Savitt). 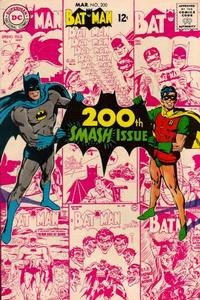 The Man Who Radiated Fear! (Table of Contents: 1)

Credits for script and inks confirmed from Julius Schwartz's editorial records, provided by DC Comics. Records show that Bob Kane was paid for the pencils, but scholars agree that pencils were actually by Stone.

The Bat-Man (Table of Contents: 4)

Reprint of first page of the first Batman story.

The Batman Says: (Table of Contents: 5)

Genre
superhero
Characters
The Batman [Bruce Wayne]; Robin [Dick Grayson]
Synopsis
In this article, Batman and Robin try to convince readers that they hate all crime and criminals, and that they hope their adventures will help convince them to follow the straight and honest path in their own lives.
Reprints

Script, art and letterer credits by Jack Burnley. The art is taken from the cover of New York World's Fair Comics 1940.

Note says "Adapted from a page that appeared in Batman No. 3, Fall, 1940 issue." The sequence has been reduced in size, the artwork is traced from the original, and all the text has been re-typeset.